Since May 3 in Hawaii, the Kilauea volcano erupts. Due to the threat of lava flows, residents of nearby areas were evacuated. May 17, a gas explosion in the volcano caused the emergence of a column of volcanic ash a height of more than nine kilometers.

Strictly speaking, Kilauea began to erupt on January 3, 1983, and since then the eruption has not ceased, only the periods of intensification of activity have been replaced by times of relative calm. The events of May this year became the 62nd activation of Kilauela in thirty-five years. In general, this volcano is clearly in the front ranks of the contenders for the title of the most active volcano. In the XX century, only once the break between its two eruptions exceeded ten years (1934-1952). 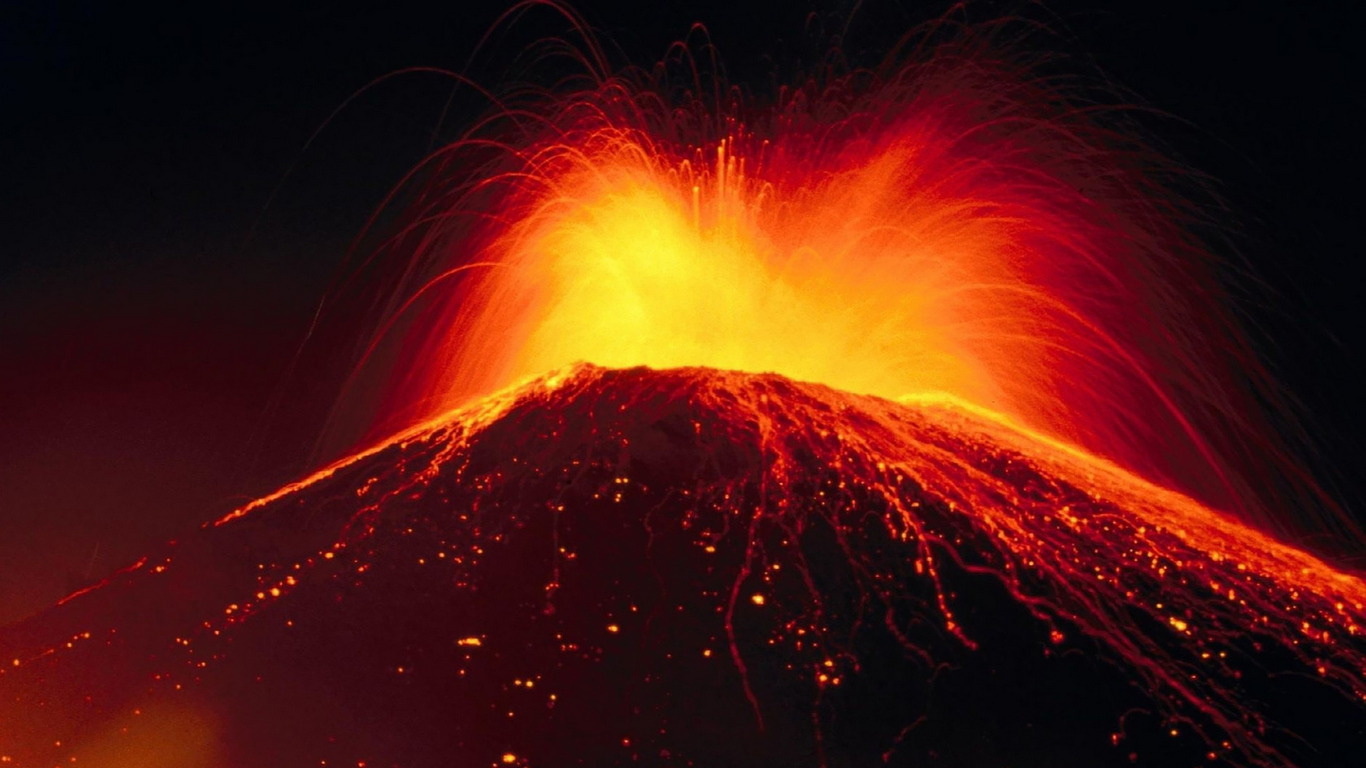 Kuliauea belongs to the so-called shield volcanoes, volcanoes of this type occur when a lava of low viscosity is spread over long distances and, when frozen, forms a “shield”. The next eruption gives a new layer of frozen lava, and so gradually the shield volcano grows. The base of such volcanoes is very wide, for Mauna Kea, for example, it has a size of about 120 kilometers (in the surface part, in the submarine even more). But their slopes are very flat, the slope is only about eight degrees.

Five shield volcanoes forming the island of Hawaii. Three of them are active: Mauna Loa, Kilauea and Hualalai

Shield volcanoes are divided into two subtypes: Icelandic and Hawaiian. Hawaiian volcanoes are larger, and on their slopes there are lateral cones. Icelandic are relatively small and lateral cones usually do not. The extensive shield of Kilauea volcano has a lot of lateral craters and cones, the present eruption occurs through the crater of Puu-Oo.

For some time, geographers even considered Kilauea to be a secondary branch of the neighboring larger Mauna Loa volcano, but now it is established that Kilauea has a separate magmatic chamber. Confirming that, scientists were able to use a chemical analysis of lava from each of the volcanoes. This is also evidenced by the activity of Mauna Loa in 1934 – 1952, when Kilauea took a break from work. The reverse situation: Mauna Loa died down, and Kilauea erupted – was observed in 1952 – 1974. However, some interaction between volcanoes sometimes manifests, possibly due to the fact that the accumulation of magma in one of them leads to an increase in the pressure in the neighboring one.

The summit of the Kilauea caldera has a size of 4 by 3.2 kilometers and a wall height of up to 120 meters. Its main crater is Haelemaumau with a diameter of 920 meters and a depth of 85 meters. It last erupted in 1974. Kilauea has two rift zones that run to the east and southwest of the main caldera. The length of the eastern is about 125 kilometers, the south-west is 35 kilometers. 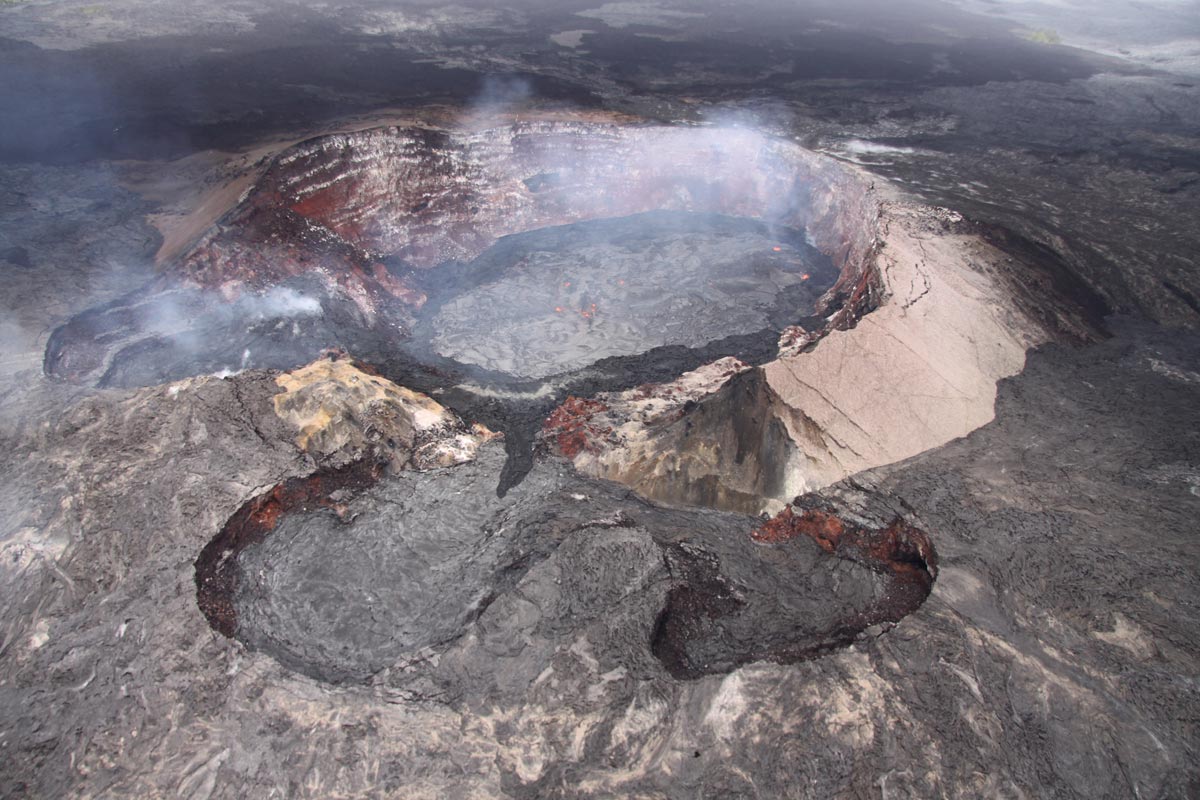 In the mythology of Hawaiians, the Kilauea volcano was considered the home of the goddess Pele and the place where her turbulent relationship with the hero of Kamoupua, connected in Hawaiian legends with rain, developed. It was said that one day Kamoupua came to the house to Pele and her sisters and tried to impress them. He managed to charm the sisters, but Pele did not succumb to his charm and called him a pig. Here she was right, since Kamoupua had some pig features (his name Kamoupua means “man-pig”), which, however, did not stop him from being a hero-lover. However, Kamoupua’a was offended, between him and Pele began a quarrel. When Kamoupoua tried to approach Pele, she fired at him, but the hero was rescued by her sister Pele Macahanaloa, who fired fog and rain on the fire. Pele acknowledged her defeat. When the fire went out, there were sticks, the friction of which the Hawaiians were making fire. A Kamoupua divided the island of Hawaii, taking a wet windward north-eastern side and giving way to a dry and covered with a frozen lava leeward. A ridge of clouds at the tops of volcanoes Hawaiians began to call pigs (pua’a).

There is an option in which Kamoupua’s coped with Pele without assistance, closing her dwelling in the volcano with leaves of a fern. Although Pele was furious, she had to accept it. Between Kamoupua and Pele was a peace agreement with the division of the island. As a result of this battle, a fern appeared ‘ama’uma’u (Sadleria cyatheoides), whose young leaves are painted red. And one of the craters of the Kilaulia volcano was called Halemaumauma (“fern house”). There are such legends where Pele finally falls in love with Kamoupua, and with the help of a spell encourages him to return to the island, they become lovers and give birth to a daughter. Kamoupoua turns Pele’s frozen lava into fertile soil.

Let’s return from the mythological past to the present. The first signs of a new intensification of Kilauea’s activity were a series of tremors on May 3. Shortly thereafter, several sources of lava were discovered along the eastern fissure. Its floods forced the authorities to issue an order for the evacuation of 1,700 people from the Lehalani Estates settlement. 37 buildings were destroyed by lava.

The lava outlet sharply dumped pressure in the network of Kilauea underground canals, connected to its magmatic chamber. As a result, the level of lava in the crater of the volcano quickly fell by 30 meters. “It’s like someone pulled a cork from the bath,” – says volcanologist of the US Geological Survey Michael Poland. Because of this, the crater walls collapsed inward, creating a layer of stone on the surface of the remaining lava. The level of lava continued to drop. As soon as the lava in the crater sank below the groundwater level, water began to seep into the crater. It turned into steam, creating a high pressure under the debris of the crater. From that moment the explosion became inevitable. 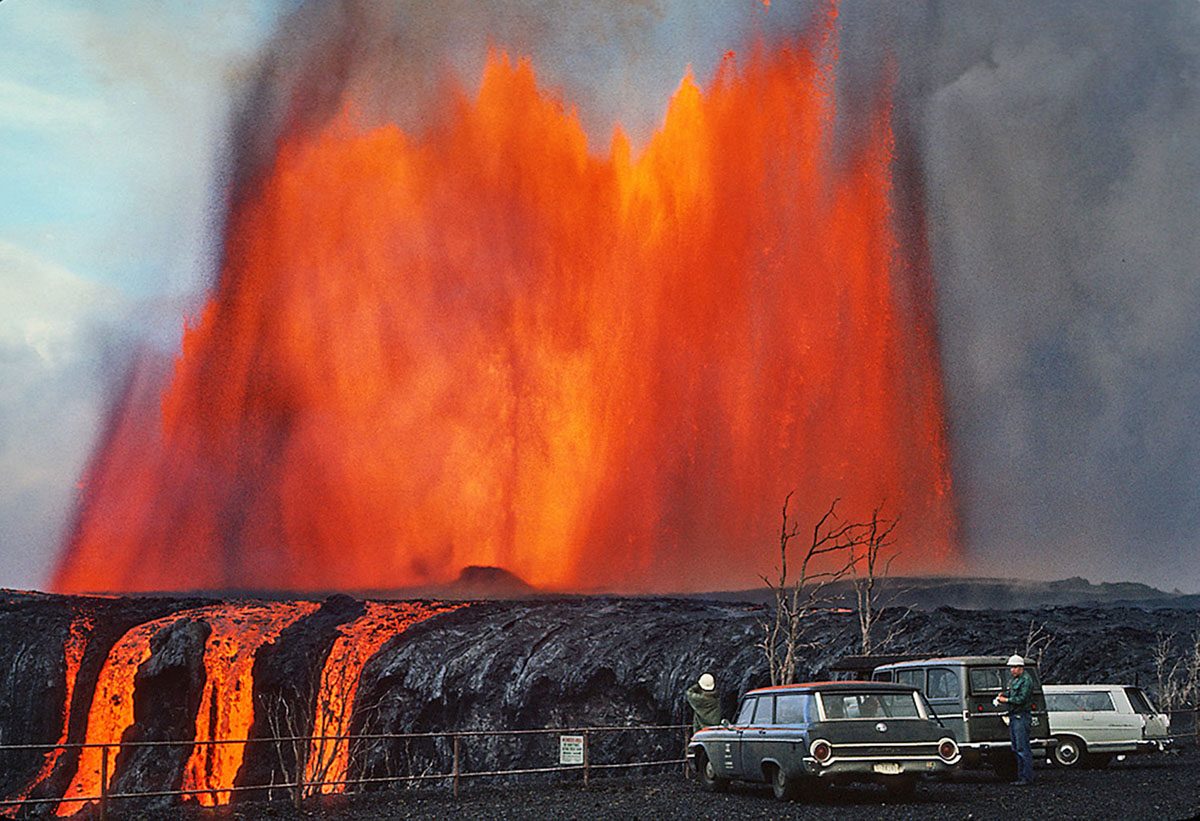 It occurred on May 17 at 16:15 local time. Kilauea threw a plume of volcanic ash and steam to a height of more than 9100 meters. Now volcanologists continue to monitor the volcano. They say that new explosions are possible. For example, under similar conditions in 1924, Kilauea issued a series of more than fifty steam explosions within two weeks.

The Hawaii volcanologist, Bruce Houghton, says the current event seems to be a complex eruption that happens once every 50-80 years. It is not yet possible to say when people will be able to return to abandoned homes and how many of these houses will survive to their return.