The highest peak of the globe – the white pyramid of Everest (Jomolungma, Sagramatha) – stately ascends to a 9-kilometer height. It is located in the Great Himalayas, on the border of China and Nepal. Officially, its height is 8848 m. It is recorded in all textbooks, reference dictionaries and geographical atlases.

Contrary to popular belief, Everest (Jomolungma) is not the highest mountain in the world. The highest mountain on Earth is in Hawaii and is called Mauna Kea (White Mountain). The total height of the mountain (if measured from the underwater base to the top) is 10,203 m, of which only 4,205 m is above sea level. This is an extinct volcano. 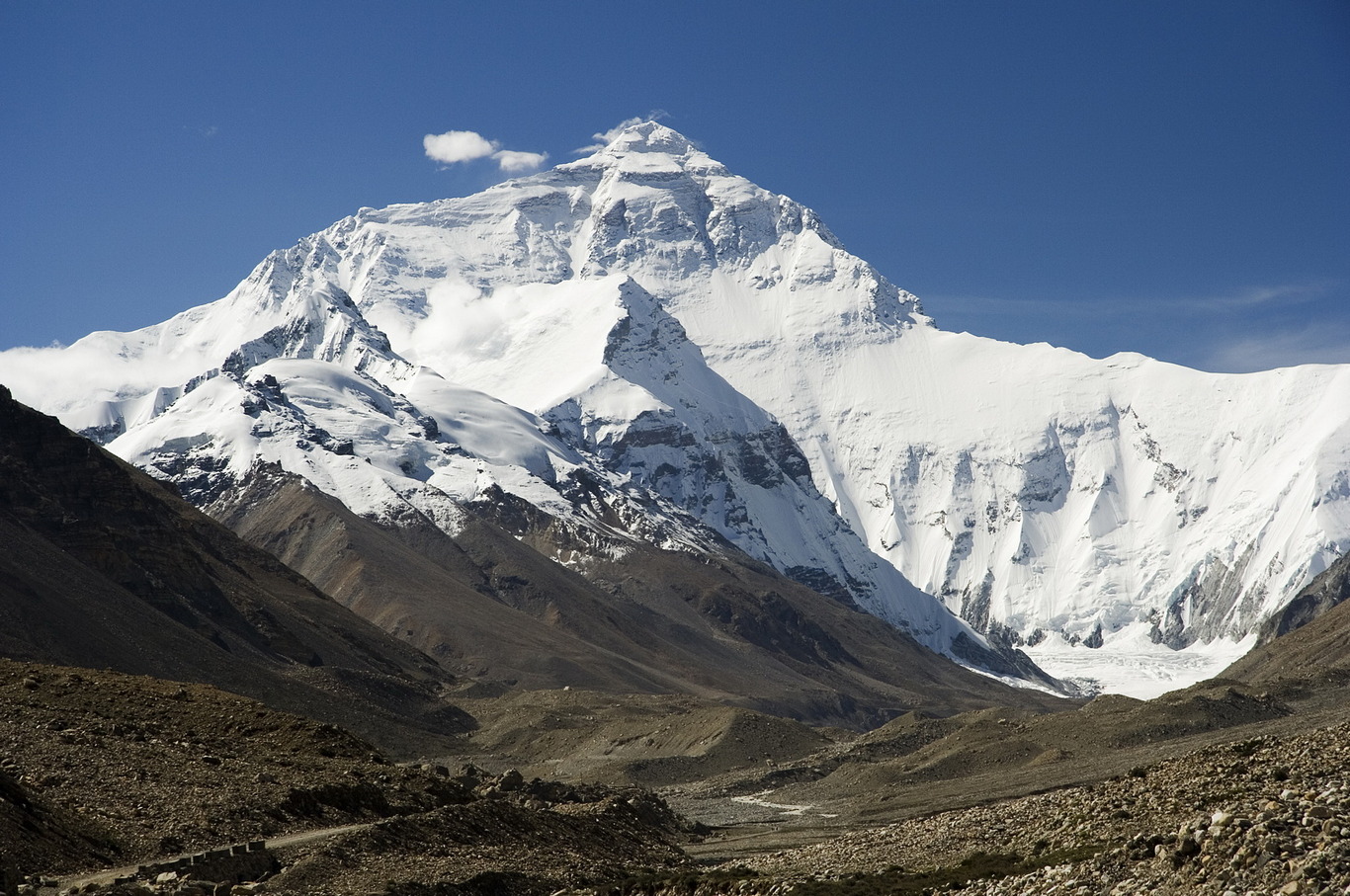 In November 1999, at a meeting of the National Geographic Society in Washington, it was decided to consider that the height of the Jomolungma – the greatest peak in the world (if taken from the sea level) – is 8 thousand 850 m. Previously it was believed that its height by 2 m less. The value of 8 thousand 848 m is still on all maps, in all the reference books and school textbooks. It was officially installed in 1954 as a result of repeated measurements with the help of aerial photography and instruments, the technical level of which, of course, can not be compared with the current one. But this does not mean that then a mistake was made. It turns out that Jomolungma is growing.

This was established by an expedition of the American explorer Brenford Washbourne, who for several years organized expeditions delivering electronic equipment to the top, so that, by satellite guidance, each time fix deviations from previous readings. In the course of research, Washbourne succeeded in not only revealing a very clear growth dynamics of Everest, but also establishing the periods when this growth is the most significant.

It turns out that the most rapid growth at the mountain happens, as a rule, in the years of high seismic activity on the whole globe in general and on the Eurasian continent in particular. For example, it was 1999, for the first six months of which Everest grew 3 cm. Recently, the Italian geologist A. Desio, using modern radio equipment, carried out more careful measurements of Everest and found out that its height is not 8848, but 8872 , 5 m, i.e., the mountain is 25 m higher than previously thought.

But that’s not all. With the help of satellites and instruments at the top of the mountain, scientists have established that Jomolungma does not stand still. It turns out that she constantly wanders northeastward from India through Nepal towards China. The cause of this movement is the displacement of the earth’s crust and tectonic plates creeping into each other.

The fact that Everest is growing is not surprising, since the Himalayas belong to one of the youngest and actively developing geological belts of the Earth.

The peak was discovered in 1832 by employees of the British Geodetic Survey, located on the territory of India. The British conducted the processing of filming of some Himalayan peaks and found that the unnamed mountain marked on the map as the Peak XV is the highest of all peaks of this ridge.

In honor of the head of the geodesic service, the open top was named Everest. It is under this name that the summit is known today in many countries of the world.

Local residents knew about the existence of the summit and that it is the highest, long before its discovery by Europeans. The monks of Tibet called her Jomolungma, which means “goddess is the mother of the Earth”, Jumulang-mafeng, or “goddess-bird of the storm”, Kang-Cha-Mo-Lun – “snow in the kingdom of birds”. In Nepal, it is known as Sagarmatha, or “heavenly summit”.

About this peak, it seems, is mentioned in this saying: “Where the sky meets the earth, where life and death share only half a step, where people from the west and people from the east are equal each in front of their God and with the only desire to be for a minute above all on the planet Earth rush up, higher and higher … There, in the distant halls of the Himalayas, stands a huge mountain. This mountain keeps the eyes of the great Buddha and the soul of those who came to look into His eyes and stayed here forever… ”

In the Middle Ages, at the foot of the northern slopes of Jomolungma, the Rongbuk Monastery was built. This structure has survived to the present day and is still inhabited.

From the territory of the monastery, Jomolungma is especially picturesque. But even from a distance of tens or even hundreds of kilometers to the north-west, from mountain passes it looks no less majestic: at its top there is always a sparkling snow cap. Quite often a hurricane wind tears snow from the top, which mixes with clouds and forms a trail stretching across the sky for several kilometers. Mountaineers nicknamed this trail snow flags.

So the top looks from the north. The first ascent from the northern slope was accomplished by the Chinese Wang Fu-chou, Qu Ying-hua and Ganpo. They climbed to the top in 1960.

However, climbers began to show interest in Everest long before that. For a long time, they tried to get permission from the local ruler of the Dalai Lama to climb to the highest peak of the world along the northern slope. The permission was obtained only in 1920, after the intervention of the British government. Soon after this, long and unsuccessful attempts to conquer Everest began.